My day in the land of Wonka

In 1929, a man named Aram Zildjian passed the family business down to his nephew, Avedis III. The family business was cymbals. It had been highly successful and lucrative for over 300 years, and had been passed down from father to first son for many generations. Not having any sons of his own, Aram wanted to pass it down to the closest thing to a first born son that he had...his nephew.
Avedis had built a successful candy business in Quincy, MA and agreed to take on the family business so long as the business could move to America. Aram agreed and the Zildjian Cymbal factory moved to the USA.

The business almost immediately became a fixture in American music from that point onward, shaping the sounds of American music for generations to come. In fact, they are still making innovations today.
Recently, I had an opportunity to go and visit the factory. I had equated the whole thing(in an earlier blog) to feeling like Charlie Bucket having a golden ticket to visit Wonka's magical factory. My visit was all that I had dreamed of and more. Funny that I should equate my visit to a child getting to peer into his favorite candy maker's factory, when the first American proprietor was indeed, a candy maker himself before taking on the family business.
I met lots of folks there and even the current owner Craigie Zildjian...whose father passed the business down to her several years back. I find it very interesting and intriguing that a family business that had been passed down from father to son for so many generations has been, and will be for a while, passed down from mother to daughter.
The tour was, well...incredible! I got to see lots of cymbals. I got to see and touch drumkits that were owned by the great Gene Krupa, and the incredible Buddy Rich. I got to see almost the entire process of how cymbal comes into being...I say almost because there are some things there that have to remain secretive. To be honest, I don't want to know those secrets...it would be like seeing exactly how David Copperfield levitates over an audience or makes the Statue of Liberty disappear. I did get to see a lot though, and it was an experience that I will not soon forget. The phrase "kid in a candy store" doesn't even begin to come close to the level of excitement I experienced. My lovely wife was sooooo patient about it all. She patiently waited while I had pictures taken of me, while I ogled over every detail, and while I tried out several cymbals. Seeing her be so enthusiastic about something that should seem so foreign to her, serves as a reminder as to how truly blessed I am. Yes...I have the coolest wife EVER!!(she even loves muscle cars!)
Inside the factory offices, the folks there at Zildjian recreated the famous factory door from 1929. Here's me standing in front of it... 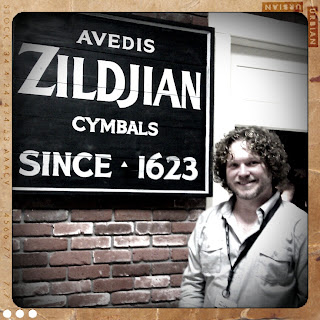 Holly was kind enough to humor me by taking my picture! I love her so much!!
Hopefully I can make a regular pilgrimage to the factory...
Posted by Chris at 10:54 PM