So I'm hangin' out at the house, and I happened to see a small piece of a television show in which a struggling musician who has just experienced a small career setback says to his girlfriend, "Well, I guess if it were easy to make it in this business, everyone would be doing it."

The phrase struck me deeply for some reason. In spite of those words being spoken as part of a prime-time drama's banter, I don't think any statement could be any more true.

I remember thinking (and saying) the same thing once after having a conversation with a random person at a not-so-random event.

The random guy asked me, "SO...how do I get a gig like you've got?"
My reply was, "That's an interesting question with an interesting story. Why? Are you a musician?"
The next statement was what perplexed me the most...
Random guy answers with, "No. I don't play anything. But I've always thought it would be fun. I've been thinking about buying a really big, really nice, really expensive drum kit, but I don't want to make that kind of big investment unless I definitively know that I can have a high profile gig like yours."
My retort?..."(laughing) Well, maybe you should stick to your day job."

---To be absolutely honest- it seriously pissed me off that this nimrod thought that my good fortune in life was just whimsically gone into, as if I used to be an accountant and then woke up one morning, bored with numbers, and simply decided that I would be a drummer in a well known band.
Sure...it's exactly just as simple as that!!! Quit your job, buy an instrument, and SHAZAAM!! You're now playing in front of tens of thousands of people nightly and conveniently rich and famous! What an asshole.---

"No...really dude," the random guy says. "If I go and drop a bunch of money on a really huge and expensive set of drums, how can I guarantee that I'll become rich and famous like you?"
"(more laughter) No...really. Stick to your day job. There aren't any guarantees that you'll ever become successful enough to even make a decent living...especially considering that you don't know how to play yet."
Random guy gets a deeply concerned look on his face and asks, "So how did you get to become rich and famous?"
My retort?..."I'm neither rich, nor famous...but thank you for thinking that I am. Truth is, I've been very blessed to be able to do what I love for a living. I would do it for little or nothing...and have many times."


As I walked away from the conversation with random nimrod I quietly whispered to myself, "If it were just that simple...everyone would be doing it."
Posted by Chris at 11:15 PM 1 comment:

Another season has passed us all by, and by my calculations the leaves on trees everywhere north of the Gulf of Mexico are beginning their swan song into winter. I, like many folks, enjoy the colors that fall brings...earthy and vibrant colors that seemingly cannot be replicated by any human means. I have always enjoyed the fall season. To me, the coming of fall always means the coming of my birthday, Thanksgiving, and then Christmas right around the corner. Beyond that, a new year, full of hopes, ambitions, new and renewed dreams, would be standing in wait.

My beautiful wife, Holly, doesn't seem to care too much for fall...she's much more a fan of spring and all of its beautiful colorful splendor that new growth and budding flowers bring to the season.

However...
Holly is a huge fan of Halloween. I still haven't been able to put my finger on exactly why, but I really love seeing her expose her impish, inner child. I also absolutely adore the fact that she takes such time and care to put out Halloween decor around the house. The semi-fancy table cloth that usually adorns our kitchen table has been replaced with a large, lace-like, black spider's web, and atop it, our Halloween punchbowl set (which, incidentally, has been filled with an assortment of fun-sized candy bars and chocolates). In our den, she has strung the ficus tree with "ghosts" that can be illuminated by the simple flick of a switch.

Candles, candlesticks, cute and friendly ghosts, witches, and jack-o-lanterns are all about the house, serving as a reminder to all that come in, that the season of pranks, ghost stories, and trick-or-treaters is here. It is the only time in fall that my wife seems so unavoidably happy...and it's so very contagious.

Her child-like and impish verve during this part of the year makes me love the fall that much more...and her as well!! 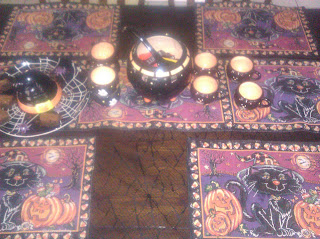 Our kitchen table...
Posted by Chris at 1:39 PM No comments: