A few nights back, me and the boys had a really fun experience. We played at CMA Fest...the big stadium show. As has been the case in the past, it was such a good time!
Every year we have done this, one of the highlights for me has always been bringing out a special guest, usually a very well known artist. This year was no different. This year, we were lucky enough to be joined by double-necked guitar aficionado Richie Sambora of the band Bon Jovi. He came out to perform with us one of their biggest hits, "Wanted, Dead or Alive".

While the performance went very well, and was arguably one of the biggest sing-a-longs of the night, the real joy for me was getting to hang with Richie. (He's one of the biggest rockstars on the planet, how could that not be fun?) Not sure what I was expecting from a guy that's had an amazing thirty year career of being a bona-fide rock star, but I can tell you that I was pleasantly surprised to find out how much of a regular guy he is. Our first introduction was in the parking lot, we were both headed to the bus where we would hash out the arrangement of the tune. Handsome and kind-natured, he shook my hand and gave a brotherly hug as if we had known each other for years. (incidentally, for those of you with olfactory fascinations, he smelled amazing!)

During the "rehearsal", I was deeply impressed with his musicianship. We wanted to change the key of the song so that it would be easier to sing, and with a very cavalier attitude he enthusiastically said it wouldn't be a problem. He fiddled around on his guitar for a few moments and with a big grin said, "Yeah...I got it. No problem!" This impressed me because he's been playing that song in the same key for thirty years and then out of the blue, he's asked to perform it in another key. Without hesitation, without reservation, he jumped in and made it happen. Impressive indeed.

Soundcheck...he gave us all a reminder of what an electric guitar is supposed to sound like in a stadium. It's not often that we get to perform in those types of settings, but for Richie, it seemed like it was second nature...hell, I guess it is at this point.

Performance...it was loose and fun. To me it felt as though we had been playing that song together for years. It was a rockin' good time and the crowd at LP Field sang along to every word. If Richie had half as good of a time as I did, then he had a lot of fun!

Much later, after the performance, there were mutual hugs and "thank you's". He even took the time to snap a quick photo with me and my wife (who had jokingly said meeting Richie was, for her, being in 1986 all over again!). And, after collecting his things, Richie rode off into the night, much like the character described in the lyrics of "Wanted", moving on to the next show in another town.

My impression of Richie is that he's just a regular guy, with regular problems like the rest of us...he happens to have an amazing job doing what he loves, and being able to do it at an amazingly high level. Believe me when I tell you that he loves making music. Thank you, Mr. Sambora, for being so
kind, gracious, funny, and for making a memorable time even more memorable. I hope we cross paths and share the stage again soon! 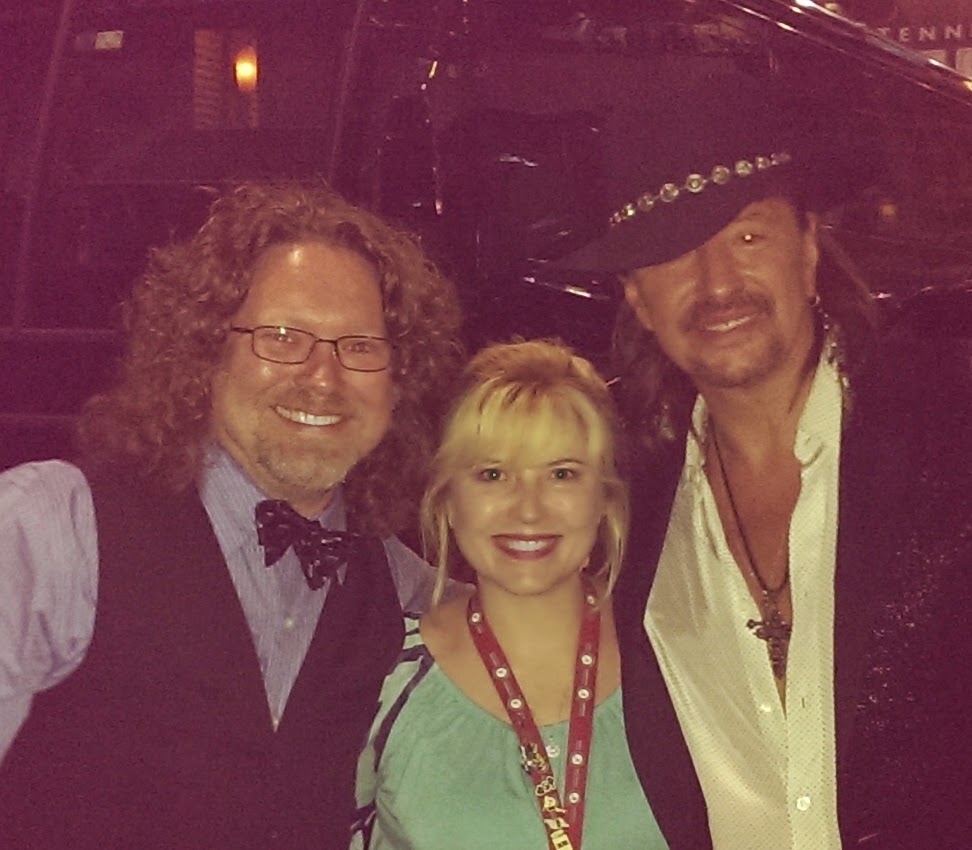 Dinner with the coach...

Tonight, my wife and I went with some friends to a large dinner with one of today's most successful college football coaches, Nick Saban of the University of Alabama. It was one of those big fundraiser type of dinners with many in attendance. The friends of ours who had acquired the tickets also got us some VIP passes to meet the coach beforehand, as well as the Athletic Director, Bill Battle and several other important folks there.
Getting to meet Coach Saban was such a treat. Very well spoken, with a friendly and inviting demeanor, he was kind enough to take a few moments to speak with everyone before indulging everyone with a brief photo op.
My wife, although cool and collected on the inside, was quite excited to meet Coach Saban. Afterwards, I asked her if it was equally as exciting as the time she met Sheila E. at the NAMM show in Anaheim earlier this year and she calmly confirmed what I already suspected...that she was way more excited to meet the coach.

Later, Coach Saban spoke to everyone in what could loosely be described as a "State of the Program" address. To have met the man was an enormous treat for me, but to hear him speak on subjects such as success, discipline, and maintaining momentum...well that was even more wonderful.
He addressed what he felt were potential problems, heralded achievements and progress, and above all else, he accepted accountability for the shortcomings of the team as a whole. He spoke with conviction, direct candor, and at times, with a little humor. He even gave me cause to look inward and think of ways I can be better at my own job...which, incidentally, has very little if anything to do with football. He was eloquent and inspiring.

Yep...it was a very enjoyable night. Seeing my wife have an enormously good time, and the smile on her face for the whole evening was definitely worth the price of admission. Thank you, Coach Saban, for putting a smile on my wife's face and for taking the time to speak to a group of fans and supporters.
Posted by Chris at 9:57 PM No comments:

For the past couple of years I have noticed that more and more atheists have been filing lawsuits and making television appearances to lodge their complaints that they find the sign of the Cross, and many other Christian symbols and representations of faith offensive.
This morning, while reading a newsfeed, I saw a story on another such lawsuit in which an atheist was demanding that the steel girder cross at the site of the World Trade Center should be removed due its highly offensive nature. Hmmm...

By the way, in case you don't know---
Atheism, by definition, is the disbelief in any deity. It is the belief that there is no such thing as God in any form, or by any name.

Feel free to look it up. After you do, here are a handful of important questions that (in my mind at least) beg to be asked...
~ Why are so many atheists offended by only Christian symbols of faith and no other religious symbols? You never hear of any atheists boycotting or protesting because of the Star of David, the Menorah, the Crescent and Star, Om, the signs of the Zodiac, or the myriad of other religious representations. What exactly is it about the symbols of Christianity that are so overwhelmingly offensive to atheists? And why be offended at all by any religious symbol?

~And how can any atheist expect to have their belief system respected by others if they are so unwilling to be respectful of other beliefs?


For the handful of you out there who might be atheists, my apologies if I have offended you. I'm not trying to ruffle any feathers here...just trying to point out a little absurdity that seems to keep making the headlines.
Posted by Chris at 1:32 PM 1 comment: