DISCLAIMER... This post may contain some very harsh language. In fact, let's just say that it WILL. If you're easily offended, please stop reading and leave now. Otherwise, don't be bitchin about it afterwards. Enjoy!

So, the guys and I have a few shows in the Land Down Under. It should be a whole lot of fun. It will be my first trip to Australia...so to say the least, I am very excited about the trip, save for one thing...having to be so far away from my wife and daughters.

- Getting Down Under and the loss of time - Day(s?) One
There is something to be said for feeling like you have lost a whole day. It's an entirely different thing to actually skip one. Allow me to elaborate...
I woke up very early on March 22. I had boarded the first of four flights at 10:30am CST. I flew to Atlanta, where I had a layover of about three hours. I then boarded flight number two at about 4pm EST. I then flew to Los Angeles where I had another layover of about two hours. I then boarded flight number three at approximately 8:40 PST and flew to Sydney, Australia.
It was March 22 all day...throughout all of those flights. However, when my flight landed in Sydney at about 6:30am, it was 6:30am on March 24.  THAT'S RIGHT!! By flying over the International Date Line, I had completely skipped an entire day. One whole day of my calendar that I will never get back...actually that I will never get to begin with! There's only one word that describes all of my emotions regarding this particular sensation...SHIT! There has been a discussion with the guys as to whether or not we will "make it up" on the way home. Personally, I think that the 23rd of March, 2013 just managed to disappear into the ethos. It's as if David Copperfield himself was on the flight and decided to amuse himself by shelling out a little prestidigitation..."Hey everyone! Want to see something cool? Alakazam!! Ta-dah...Now it officially the day after tomorrow!!" REALLY, DUDE?!?! What if I had something important to do specifically on March 23, 2013? Well I guess those plans are forever fucked up!! The way back home an entirely different encounter with the space-time continuum...I will wake up and board a flight that leaves at 6am, I will travel for approximately twenty-six total hours, and arrive at my final destination on the exact same day that I left. Trust me when I tell you that it IS possible!! Oh...I've done the math...it's going to happen!!

The trip getting to Australia was pretty uneventful, as most of my travels involving airports can be. I love people-watching...and airports possess no shortage of people-watching. The airports this day would not disappoint! During one of my layovers, I happened to notice this pair of twenty-something aged women who kept walking back and forth at various intervals in front of my perch at my gate. One of them had what I would call a "million dollar booty". I am not being disrespectful by saying this, I mean the thing probably had a gravitational pull of its own. It was the kind of booty that women like J-Lo and the Kardashians would be envious of. I couldn't help notice it...this was exacerbated by the fact that the woman was wearing really tight yoga pants that had to be two sizes too small, and a tight, pink, "wife-beater" tank-top shirt that had Hello Kitty on it...though it should have said "Hello Titty" because it was barely capable of containing this woman's breasts. I believe in dressing comfortably for air travel, but the outfit this woman had chosen for her day of travel would have raised a few eyebrows of disapproval at even the sluttiest of gyms...and street corners.
I wasn't staring at this woman's ass...I swear. It was kind of like looking at the sun; you get a sense that it's there but you never look directly at it. However, she apparently noticed that I had noticed and at one point stopped and glared at me, almost as if to say, "Fuck off you creeper!" I was unaware of reacting, but I must have because she then gave the look of "Yeah, you...asshole!" I looked away and went on with my random people-watching, but I did happen to overhear the now perturbed woman telling her friend that the creepy guy was staring at her ass, to which her friend replied with this...
"In those pants? What did you think was going to happen? If you don't like it, maybe we should find a place to sit down."
Absolute brilliance and brutal honesty. I love it! However, I sort of got pissed after that...I mean, there's a certain level of personal responsibility that comes with wearing an outfit like that, and this woman was upset that she achieved the desired effect, and then wanted to be bitchy about the fact that some random guy noticed the way her too-tight-for-yoga pants made her ass look...
My wife and I have created a sick hobby of people-watching and joking with each other that some folks obviously don't ever look in a mirror before leaving the house, or if they do, they choose a path of denial and convince themselves that what they have chosen to wear out in public is actually a good idea. C'mon...you know you've done it too -seen someone in a public place, wearing something completely inappropriate, and saying under your breath, "What the fuck were they thinking?"
I will go on record now and tell you that I am the last person on earth to give any kind of fashion advice...I'm a t-shirt and jeans kind of guy...always have been...deal with it. But I do know what is and is not appropriate for public attire. Obviously, the yoga pants woman had failed to choose wisely, or at the very least had failed to accept accountability for her lack of self-dignity. I've seen professional, long-term, toothless crack whores working a street corner that have a deeper sense of dressing appropriately than this woman...and they certainly would never get pissy about someone noticing that they are dressed like a whore!

So...after four flights, three layovers, dealing with Australian Customs authorities, having not slept very well during the flights over, all while managing to completely skip an entire day, I finally arrived with my comrades in Melbourne. We got to the hotel without incident. However, once at the hotel, I had to wait around for an additional two hours to get into my room...that sucked...a lot. While I waited I figured out that I had not gotten any real rest for well over twenty-four hours. In order to get my internal clock reset to local time and to try to get beyond the jet-lag, I had to keep myself awake for a good long while...going to bed at or after 10pm local time, would help me sleep through the night waking up refreshed and with some sense of normality. To help myself keep awake, what did I choose to do?
...BLOG.

---Currently, while I am writing this, I am dead tired. The word exhausted does not even begin to express how tired I am. I feel like total shit. I'm on the verge of delirium and collapse. I'm quite convinced that what I am feeling is very similar to coming down from a two-week cocaine bender, the biggest differences being that my sinus cavities are fully intact, I actually have money in my wallet, and I haven't touched any substances that could be deemed even marginally questionable other than the chicken marsala that I ate on the plane. Currently, I have at least two more hours before I can allow myself to go to bed. Perhaps these two photos can sum it up... 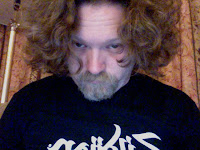 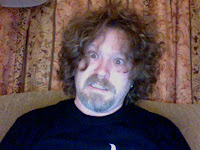 ------I miss my wife and daughters terribly. In spite of being very excited to be in Australia, I am already extremely anxious to get back home.
Incidentally, I have so far, found the Land Down Under to be very interesting and beautiful, and the locals here in Melbourne to be extremely friendly, courteous, and helpful. I hope to be well rested in the morning and capable of enjoying it more, and while I am in no hurry to leave immediately, I have already been counting the days, hours, and minutes until I can wrap my arms around my family and give them sweet kisses!
Posted by Chris at 5:10 AM